Meat or fish? Shoes or boots? Walk or get the bus? Sometimes decisions are straightforward, made with little or no struggle. But sometimes it’s not so easy. We can weigh the pros and cons, and see what looks like the obvious choice on paper, but something gets in the way of making the move, of taking the next step. Sometimes, our heart can pull us in a different direction. And of course, some decisions are easier than others. Deciding what to eat or what to wear is easier than deciding to stop a bad habit that we know is damaging to us, or deciding to end a relationship that isn’t giving us what we want. 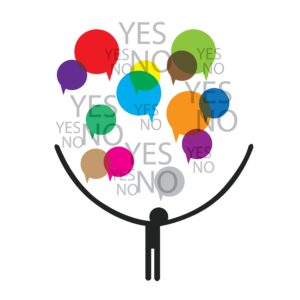 Fear of making a decision has many faces. A decision means choosing to follow one of a number of options, and by definition, it usually means letting go of the other options. It raises the spectre of getting it wrong, and although sometimes a decision can be reversed, it isn’t always possible or practical. There are usually consequences to making choices, and while some can be anticipated, we can’t always foresee every eventuality. A significant part of the struggle comes from the meanings we give to our choices, sometimes outside our conscious awareness.

While the fear of making the wrong choice may be a blockage for some, conversely the fear of making the right choice might be just as scary. The thought that we might actually get what we want, that we might actually be happy in our choice, can challenge our sense of ourselves at a very deep level. Consider for instance, the woman who is wondering whether to leave an unhappy relationship after years of hoping something will change. While the relationship may not be bringing her the happiness she craves, it is at least known, and in that sense more comfortable than the great unknown of life on her own when the relationship comes to an end.

Or the man who has been escaping from his life through a dangerous cocktail of drink and drugs. Letting go of the damaging addictions may bring him a more healthy lifestyle, but may also open the reality of the unsatisfactory world from which the addiction had been providing a distraction.

Any decision can be threatening if making a choice for one option means letting go of others. For example, the leaving certificate student completing her CAO choices may be committing to a course of several years. Choosing between two similar courses may allow other choices down the road if she doesn’t like it when she gets there and choosing, say, physics rather than photography, may send her down the scientific route without the luxury of a cross over into her more creative choice.

Sometimes, a fear of making decisions, particularly big decisions, can be indicative of a bigger fear of not wanting to take charge of our lives, not wanting to be responsible for ourselves. This might turn up in asking others for their opinions, or abdicating responsibility to so called experts or professionals, or perhaps delaying making the choice until we are forced into it by circumstances, until perhaps, the decision is made for us.

Not making a decision is a decision in it’s own right, although it might not appear to be such at the time. The temptation is to avoid making the choice until the fear has abated, which it may do in time, or it may not. How long do we wait? Potentially we could could spend a lifetime deciding not to decide anything that might place us in that risky place.

If you’re finding it hard to make a decision about something that’s important to you, and you’d like to talk about it, please contact us here for an appointment.