We hear a lot about anger management techniques, how those who are experiencing strong anger need to learn to contain it, so that it doesn’t flow out at those around them in hurtful or destructive ways. And that’s all good stuff.

But maybe it’s not always about managing the anger. Holding a strong emotion, such as anger, for a long period of time can give rise to depression. We are literally depressing our anger. So what to do? Clearly it’s not appropriate to express your anger in ways that hurt people or damage property. So, is it possible to express anger in a way that is healthy for you, and release the energy it takes to hold it down so that you can use it in more fruitful ways?

Imagine what your life would be like if you had even a little more energy to give to the daily tasks of living. Imagine what it would be like to feel keen and enthusiastic about getting up in the morning, going to work, and enjoying time with friends and family doing what you like best.

Our society has a complicated relationship with anger. On the one hand, we hear in the news about the worst effects of anger. When someone’s anger and rage gets out of control, they may physically injure or maim themselves or others around them; they may damage property or seek revenge in vicious and fraudulent ways. On the other hand, our screens and our books are filled with fictional stories of rage and anger, which in some ways glorifies those who act out their anger. 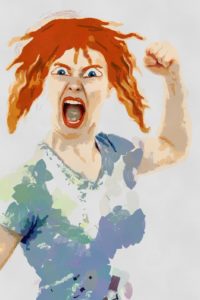 We are often taught as children that anger is not appropriate, and that we should learn to govern our emotions, by holding them deep within ourselves. We point to examples of people who act out and say to ourselves and our children, we shouldn’t be like that. We are taught that anger is bad, wrong, and by extension, that if we feel it or express it, that we too are bad or wrong.

But it takes a lot of energy to hold feelings under the surface, and increasingly, science is showing us that the impact on our bodies of trying to contain a lifetime’s worth of anger, may give rise to disease or even death. In effect, we are learning that as we can’t kill our brother, we should instead kill ourselves, by holding on to our anger, because we have no safe or appropriate way of handling and releasing it.

There are ways, simple effective ways, of releasing anger that can lead us to have healthier bodies and healthier relationships. I am not suggesting here that we express our anger in a way that gives it more energy, that we feed on the momentum of our rage. I am talking about expressing anger in an appropriate way, with a clear intention of releasing it, to find a quieter, more peaceful place on the other side.

Generally, when we are very angry with someone, it is better to release some of that anger in a neutral setting, for example with someone who is not involved, and willing to listen without judgement. Expressing anger with an intention of releasing it is best done when it incorporates these three elements: Movement, sound and breath. So for example, bringing the situation or the person we are angry with to mind, we say aloud what we would like to say to them, while at the same time making some movement with our body, such as dancing, running or walking, hitting or kicking some cushions or other neutral object, and then breathing deeply to allow the energy of the anger to move through our bodies and be expelled on our outbreath. Drawing or painting the situation and then talking with someone about what we have drawn or painted can also be helpful, as can writing about it. Always, the intention is to release the angry energy from our bodies to find a different space beyond.

Few of us can meet a very angry person and hear what they have to say, in other words, hear what might be beneath the anger. When faced with someone whose anger or rage is out of control, most of us will react defensively, and either match the anger with our own, or walk away from the situation. However, when some of the energy has been released, away from the situation, it may be possible to bring our anger into the relationship with the person we are angry with, in a way that they may be able to hear us.

If anger is your “go-to” emotion, or if your anger frightens you or others, and you would like some support with it, then you should consider working with a professional. After all, many of the hurts we experience in our lives we encounter through our relationships, and a relationship that supports us to heal those hurts is an opportunity for a new beginning.

About the author: Jude Fay is an experienced counsellor and psychotherapist practising in Naas and Celbridge, Co Kildare.  She works with adults and couples. If you would like to make an appointment with Jude please contact her on 086 232 7821 or 085 105 0337.